Skip to navigation Skip to content
Skip to Sub-menu
The Health and Relationships During College (HRDC) is a research study conducted at University of Missouri, Columbia under the direction of Dr. Antoinette Landor (University of Missouri) and Dr. Katharine Zeiders (University of Arizona). We examined 150 African American and Latino college students using online survey instruments and weekly diary reports to examine students’ experiences within the college setting. 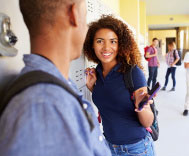 Antoinette M. Landor is an Assistant Professor in the Department of Human Development and Family Science at the University of Missouri. She received a PhD from the University of Georgia and completed a Eunice Kennedy Shriver National Institute of Child Health and Human Development (NICHD) postdoctoral fellowship at the University of North Carolina-Chapel Hill. Her research focuses on the impact of skin tone and colorism on individual, relational, and family health/functioning. She also explores how sociocultural factors influence the sexual and romantic relationship behaviors of adolescents and young adults. Her work has appeared in top-tier journals, such as Perspectives on Psychological Science, Journal of Youth and Adolescence and Archives of Sexual Behavior, and has been presented at domestic and international conferences, such as the European Congress of Psychology in Milan, Italy and the International Society for the Study of Behavioral Development in Gold Coast, Australia. She has been interviewed by EBONY Magazine and her research has been cited in NYMagazine, Salon.com, and New York Daily News. Antoinette teaches thought-provoking courses on Black Families and Human Sexuality. In addition, she serves as a Nationally-elected Representative for the National Council on Family Relations’ Ethnic Minorities Section and is a faculty mentor for MU’s McNair Scholars Program. Antoinette grew up in southern Louisiana and is a proud and active member of the Alpha Kappa Alpha Sorority, Incorporated and the Links, Incorporated. In her spare time she enjoys traveling, listening to music, and shopping.
Dr. Katharine Zeiders

Steven Berkley is a third-year doctoral student in the Human Development and Family Science department. He earned his MA in Human Development and Family Science, with a concentration in Youth Development from the University of Missouri- Columbia, and his BS in Economics from Morgan State University. His current research interests include African-American and Latino families, specifically socialization processes that impact the academic and social adjustment outcomes of emerging adults.
Alaysia Brown

Alaysia is a third-year doctoral student in the department of Human Development and Family Science. She received her BA in Psychology with a minor in English from the University of San Diego in 2016 and an MS in Human Development and Family Science at the University of Missouri. Her research interests include understanding how sociocultural factors such as race, skin tone, and discrimination impact psychosocial health and intimate partnerships. She is also interested in exploring the intergenerational transmission of relationship quality (ITRQ) and its role in shaping romantic relationship quality and adjustment.
Mattina Davenport

Mattina Davenport is a Doctoral Candidate in the Department of Educational, School, and Counseling Psychology. She earned here MA in School Psychology from the University of Missouri- Columbia, and her BA in Psychology with a minor in Political Science from Atlanta University. Her current research interests include exploring the socio-cultural and environmental factors that influence sleep outcomes in African American and Latino American populations.
Sarah Mitchell

I am a senior from Chicago, IL pursuing my Bachelor’s degree in Child Development and Education. I am an intern for the McNair Scholars Program, a Resident Advisor, and an active member of the organization Target HOPE, where they assist in creating a smooth transition for first-year African American students through mentorship and community service. I have expressed my passion for educating children and service by working as a Jumpstart tutor, being an international ambassador for the Mizzou International Experience, and participating on an indigenous-focused service trip for Mizzou Alternative Breaks. My current research interest is examining skin tone impacts the social and emotional development of adolescents. After graduating in 2019, I plan on continuing my research interests and obtaining a PhD.
Naya Sutton

Naya Sutton is a senior from Chicago, IL. She is double majoring in psychology and sociology with a minor in Human Development & Family Science. Her research interests include colorism and how it impacts interpersonal relationships as well as mental health and well-being. After graduating in May 2019 she will attend grad school to obtain a PhD in Human Development and Family Science.

Alex is a senior graduating in May of 2019 pursuing a BA in Psychology and Spanish from the University of Missouri-Columbia. He is currently the Coordinator for the Mizzou Multicultural Center and Co-Coordinator for Diversity Peer Educators. His research interests include understanding how issues related to skin-tone (colorism) and discrimination towards nationality and immigration impact the Latino and black community. In hopes to find out how these instances can impact self-esteem, educational outcomes, and overall well-being. After graduating from the university, Alex has hopes to go to graduate school and obtain his masters and PhD in order to make a greater, more inclusive society.
Holly Robinson

Where are they Now?

Candace Cunningham is from Kansas City, Missouri. She received a Bachelor’s degree in Psychology with a minor in Black Studies, as well as a Multicultural Certificate. Her research interests include colorism and how it influences romantic relationships, as well as interracial dating and intimate partner violence in young adults. She is currently in graduate school at Columbia University and earning a PhD in Counseling Psychology.
Kate Holloway

Kathleen Holloway is from St. Louis, MO. She received a bachelor’s degree in Human Development and Family Science, Family and Lifespan Development. Her research interests include, race and discrimination, human sexuality, and mental health. Kathleen was also an Ambassador for the Office of Undergraduate Research. She was a recipient of the Program for Undergraduate Research (PURE) award. She is currently in graduate school at the University of Texas-Austin and earning a PhD in HDFS.
Jayley Janssen

Jayley Janssen received a bachelor’s degree in Human Development and Family Science. Her research interests encompass early childhood development, with a particular interest in the interrelation of socioeconomic status and infant’s cognitive and social development. Jayley is currently in graduate school at Arizona State University and earning a PhD in HDFS.
Nikita Smith

Nikita Smith is from Chicago, IL, double majored in psychology and sociology with a minor in HDFS. She was the vice president for the Association of Black Psychologists and an intern for MU McNair Scholars Program. She was also a mentor for the Lutheran Child and Family Services, where mothers with unplanned pregnancies or single parents were invited to share their stories. She currently attends St. Louis University earning a MA degree in Counseling. Eventually, she would like to have her own practice where she counsels families and couples. While balancing the work of her own practice, she would like to mentor kids who are in foster care or adopted.
Deidra Bibbs

Deidra was a counselor at WestCare Foundation, a nonprofit organization that provides various healthcare services to at-risk populations. She received her BA in Psychology and Sociology. Her research interests include psychological and developmental differences among adolescents who have behavioral or emotional issues and those who have had traumatic experiences, as well as minority populations. She is currently in graduate school at Ball State University and earning a PhD in School Psychology. Deidra plans to have a career in the mental-health field in the near future.
Asantewaa Darkwa

Asantewaa is currently a doctoral graduate student in Sociology at Georgia State University. She is from Chicago, Illinois, and in 2016 graduated with a BA in Psychology and a Multicultural Certificate from all her previous experience with studying and learning about people from all ethnic backgrounds. Her research interests include developmental psychology, mental health, and psychological differences between different cultures here in the United States.
Symone Lenoir

Symone Lenoir is currently on hiatus from her graduate studies in the Department of Human Development and Family Science working towards her MA at University of Missouri. Her research interests include examining skin tone and its impact on identity development in adolescents and young adults. Presently, she is completing a yearlong fellowship with public relations firm, FleishmanHillard. As an Alfred Fleishman Diversity Fellow Symone works to increase diversity and inclusion efforts in the field of communications, promoting diversified media outreach and content development. She is originally from Saint Louis, Missouri. She received her Bachelors of Arts in Interdisciplinary Studies with an emphasis in Communication, Women & Gender Studies and Social Work and a minor in Black Studies. She has also earned the Multicultural Certificate due to her commitment to creating a more inclusive society for people of every background.

Carlton Slaughter is from Bloomington, Illinois. He graduated from Mizzou in 2016 with a Bachelors in Psychology (Minor in Social Work) and a strong background in Statistics. He was the President of the MU chapter of the Association of Black Psychologists. He is currently planning to get a master’s degree and pursue a career in I-O psychology. He would like to impact the lives of minority youth in the community.
Maiya Smith

Maiya Smith is currently working at a nursing and convalesce home in Chicago, IL as a Psychological Rehabilitation Service Coordinator (social worker). She works hands on with people who have diagnoses of mental illnesses such as schizophrenia, bipolar disorder, dependent personality disorder, etc.

Kimberly Taylor is a Junior at the University of Central Missouri from Saint Louis, Missouri. She last attended the University of Missouri- Columbia Spring 2016. She is currently pursuing her Bachelor’s of Science in Nursing. Kimberly volunteers for American Red Cross and is a member in the Student Nursing Organization (SNO) and Africana Studies Leadership Council (ASLC). Kimberly is continuing research in the Microbiology department at the University of Central Missouri. In the future, she plans to obtain a Master of Science in Physician Assistant Studies after completing her bachelor’s degree.

Kristen received a bachelor’s degree in Child Development and Education. She has shown her passion for educating children through volunteering at the Boys and Girls club of Columbia, mentoring Columbia high school students in her organization SPEAK Community Theater , and working as an assistant teacher at highly acclaimed Academy of Early Childhood Learning. In the future, Kristen plans to attend graduate school for educational policy and hopes to research policy implication in disadvantaged schools. 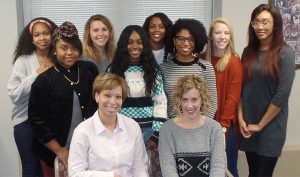 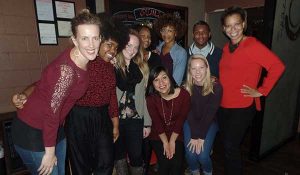 HRDC In The News
ZOOMing with the Lab 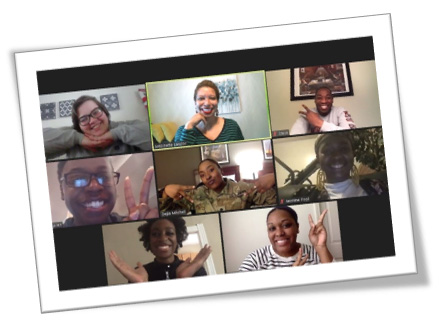 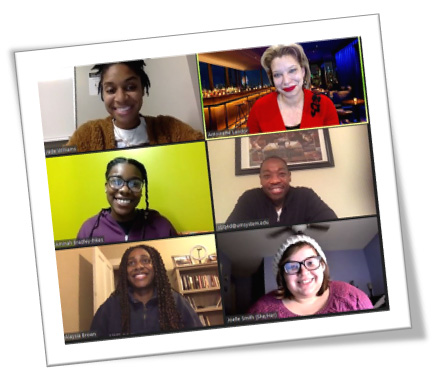 Past Lab Members at the 2019 Society for Research on Child Development (SRCD) Conference in Baltimore, MD 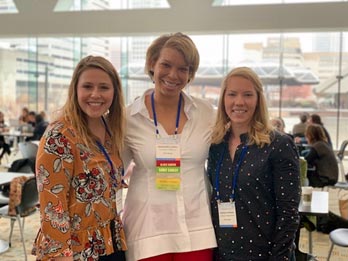 Drs. Landor and Zeiders in the Same Mizzou Gear 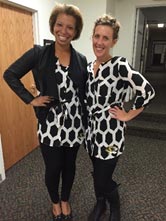 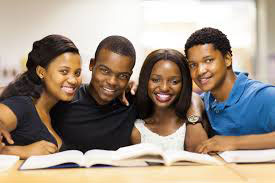 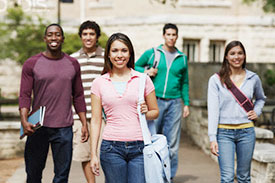 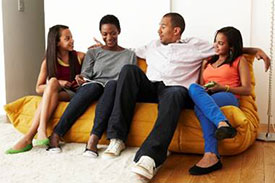