Skip to navigation Skip to content
Skip to Sub-menu 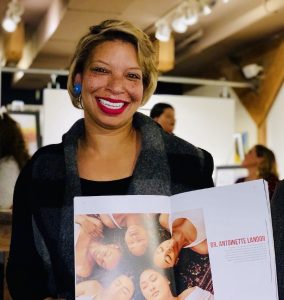 Dr. Antoinette M. Landor Named the Millsap Missouri Professorship in Human Development and Family Studies with a focus on Diversity and Multicultural Studies

Antoinette M. Landor, will serve as the Millsap Professorship of Diversity and Multicultural Studies in the Department of Human Development and Family Science, for the 2020-2021 academic year. Dr. Landor has a nationally recognized research program that is breaking new ground and pushing the field to think more complexly about how colorism and racism shapes individual, relational, and family health and functioning. Her research is also defining an entirely new field focused on the ways in which skin tone, sexuality, and relationships intersect within communities of color. Landor’s scholarly writing embodies HDFS diversity research that is cutting edge and innovative, and on a subject that is timely and relevant for a multicultural, multi-racial society.

Her work has been widely published in top journals, such as Perspectives on Psychological Science, Journal of Adolescent Health, Journal of Youth and Adolescence and Archives of Sexual Behavior, and has been presented at domestic and international conferences, such as the European Congress of Psychology in Milan, Italy and the International Society for the Study of Behavioral Development in Gold Coast, Australia. She has been interviewed by EBONY Magazine (readership of 11 million), Well + Good Magazine (readership of 10 million), and her research has been cited in national and international media outlets such as Psychology Today, NYMagazine, Salon, New York Daily News, and MedIndia:Network for Health.

Among her awards, Landor is the recent recipient of the prestigious President’s Award for Early Career Excellence from the University of Missouri System. In addition, her work has received national awards, and her article— Landor & Barr, 2018—received the Wiley Publishing Certificate of Recognition as One of the Top Downloaded Articles from Journal of Family Theory & Review. Landor teaches thought-provoking courses on Black Families, Youth Culture, and Human Sexuality. She is also the recipient of several awards for teaching and mentoring including Undergraduate Research Mentor of the Year, the Gold Chalk Award, and the Distinguished Faculty Service Award.

Landor joined the University of Missouri in 2014 and is co-founder and Associate Director of the Center for Body Image Research and Policy (CBIRP). Landor received a PhD from the University of Georgia and completed a National Institutes of Health (NIH) postdoctoral fellowship at the University of North Carolina-Chapel Hill. She grew up in southern Louisiana, attended Grambling State University for her undergraduate studies, and is a proud and active member of the Alpha Kappa Alpha Sorority, Incorporated and the Links, Incorporated (Charter Member of Central Missouri Chapter).

The Millsap Professorship in Human Development and Family Science was funded in 1997 by Marvin and Rose Millsap through the Missouri Endowed Chair and Professorship Program. This program was established with the support of the Missouri Legislature for the purpose of creating a national model, combining private and public resources to create endowed chairs and professorships at the University of Missouri.